Posted at 13:04h in Call for papers by Admin 0 Comments
0 Likes
Share 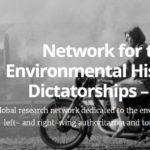 The two-day seminar offers an interdisciplinary initiative to study the evolution of authoritarian systems through the prism of how these regimes relate to their physical environment. There is a general assumption that, in comparison with liberal democratic systems, authoritarian regimes have less concern for nature preservation as they have less apprehension about their citizens’ wellbeing. There is, however, a globally rising awareness of the declining state of the environment (climate change, pollution, resource depletion, overpopulation) that endangers the existence of any human political system. Authoritarian leaders have begun to show more and more interest in global discussions and processes aiming to find joint solutions to the fast deteriorating physical environment. Simultaneously, there is a growing social consciousness and flow of information generating civic activism with an environmental agenda. Taking into consideration this complex context, the seminar aims to investigate the nature-culture and nature-society relationship of any modern authoritarian regime.

The organizers suggest the following sub-themes for consideration in relation to the natural environment in authoritarian regimes:

The aim is to publish two edited international volumes based on the outcome of the seminar.

Please, send the abstracts to katalin.miklossy@helsinki.fi
The program will be announced 28 February, 2017.

Participants are requested to make their own arrangements for travel although a limited number of travel grants are available for young academics based in overseas institutions. The accepted speakers will be offered financial support for accommodation and meals. There is no registration fee. The seminar is free for the audience.