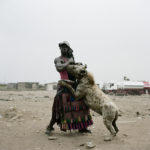 The domination-exploitation of human beings begins with animals, wild beasts and cattle; the humans associated with these inaugurated an experience that would turn back against them: killings, stockbreeding, slaughters, sacriﬁces and (in order better to submit) castration.

Henri Lefebvre, along with some perceptive members of the Frankfurt School such as Max Horkheimer, Theodor W. Adorno, and Herbert Marcuse (Gunderson, 2014), was one of the few 20th century sociologists to consider the position of animals in Western culture and society. He theorised that animals form the material base from which societies are built. It was through the control of animals that complex societies could be developed and further this created a situation where humans came to believe they had mastery over nature (Plumwood, 1993) and then by same token, these techniques of control over animals could be applied to certain humans as well (Krawczyk & Barthold, 2018). In fact, the term management, as Gibson Burrell (1997) reminds us, derives from the Italian word manegiare, which refers to the archaic practice of training horses through often cruel forms of animal handling. Hence, in our precarious present, we can perhaps sense how both non-human animals and groups of people with certain ‘social markings’ who as consequence have also been animalised, are made to sustain the lives of other humans, who seem unaware of the ethical costs of living their lives as they are.

It is very worthy and noble to articulate the grave situation faced by animals and animalised humans in culture and organization and then deliberate about the moral issues around this. However, in the spirit of constructing open futures where more beings are free from exploitation, the application of ethical frameworks is of fundamental importance to change these exploited relations. The application of a more embodied approach to ethics that also accounts for both animal and animalised humans can be found in the work of Pick (2011), she calls a creaturely ethics that takes the position that living beings, regardless of being human or not, are vulnerable beings prone to violent forces and thus worthy of love. Her work blurs the divide between the ontological status of both animals and humans, which can be the starting point of our discussions in this stream. Pick believes that individuals and societies have an obligation to try and protect vulnerable beings from violent exposure and exploitation.

The convenors of this stream welcome submissions that explore the vulnerability of diverse subjects – both animal and human – within multiple contexts and different disciplinary fields of study. This includes disciplines that are not traditionally associated with management and organizational studies, such as cultural analysis, anthropology, history, film studies, art history, contemporary art studies, visual culture, ethnic and racial studies, ecological studies, cultural studies, queer studies, settler and colonial studies, indigenous studies, literature, health care, religious studies, theology, area studies, legal studies, politics, education, social work, environmental humanities, philosophy, interdisciplinary studies and other research fields that are still emerging. The overarching aim is to wrestle with the idea of the vulnerability of life and consider the possibility of sustaining ethical relations between beings that are intrinsically motivated by love, but often exists in contexts that are not always conducive to sustaining such relations. Hence, submissions to this stream could consider how an organizational, institutional or industrial context plays some role in hindering and/or facilitating ethical relationships in multiple contexts or settings.