CFP: Toward Extinction, To Ward Off Extinction (France)

07 Feb CFP: Toward Extinction, To Ward Off Extinction (France) 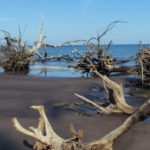 More than 99 percent of all species that have inhabited the Earth are estimated to be extinct (Beverly Peterson Stearns and Stephen C. Stearns). Hence, extinction cannot be reduced to futuristic scenarios only: it is at same time present (species are going extinct right now), present in absence (with the traces left behind by past extinctions), and awaiting in the future (extinction of multiple species and their habitats because of the human-caused climate change). Those past, present, and future extinctions construct a complex web of life and death, of coexistence and coextinction.

Extinction is thus an event that is complex, multiple, and haunting, if only because of the ambivalent responses it draws forth. On the one hand, doomsayers express a self-annihilating desire for extinction and consider that humanity is fast-set on a fateful, timely death-course. On the other hand, eco-minded people still hope to find that railroad switch which would allow for a last-minute alteration of mankind’s trajectory. This desire for the quenching out of the human race, along with the concomitant attempts at averting the end, might be symptomatic of the very uncanniness and plurality of extinction itself.

More generally, this attraction/repulsion reaction towards extinction might in fact point to the way one can approach it: to make the unavoidable avoidable, one ought to think about it; in other words, it is necessary to extend one’s thoughts towards extinction in order to ward off extinction. Thought radiates at the core of extinction.

One might argue that it is lack of thinking, and more importantly lack of thinking otherness (i.e.non-human species), coupled with a sinister capitalistic greed, that brought about the Anthropocene: indeed, as early as the Industrial Era, man’s inherently constitutive role in the fashioning of the then-discovered geological record became evident. Extinction was thereby written into our modern concept of time. Even as the concept of anthropogenic agency emerged, mankind’s invention of modern science, and especially evolution, had a gory impact upon animals, violently translating them into species and media through brutal processes of killing, excoriating, eviscerating, etc. (Jesse Oak Taylor).[1]

As humans, we need to be aware of our power to rewrite the earth with pollution, overfarming, deforestation etc.; but we should not forget that we are not only the infamous influencers of the earth, but also the readers of the earth: reading the geological strata, reading fossils, reading animal traces, and reading the consequences of climate change.

One might even aver that the next great extinction is a literary event: it can always only, and by definition, be imagined because if it were to happen actually, there would be no humans left to do the imagining.

This conference will attempt to open up new avenues to alter our ways of thinking about the earth and thinking about otherness in a more eco-responsible way: instead of wounding, the emphasis will be put on caring, on caring for the other, and with the other. Underlying this conference is the urgent need to undermine and decentre all anthropocentric views of human exceptionalism in order to reassess such notions as empathy and responsibility: how can one (take) care and be responsible for the earth? How can we implement an environmental ethics in order to stave off extinction? How does extinction force us to be responsible, not only for present-day non-human species but also to take responsibility and respond for dead species? How can literature make us more responsible readers and writers of the earth?

—
We welcome 20-minute papers that could include but are not limited to the following topics:

Proposals of about 300 words together with a short biographical note (50 words) in Word or PDF format should be sent to towards.extinction.lille2019@gmail.com by March 1st, 2019. Files should be named and submitted in the following manner:

Submission.FirstNameLastName.docx (or .doc or .pdf)

[1]As Jesse Oak Taylor explains, “[i]n order for species to take shape, animals first had to become specimens. The “type” had to be abstracted from the individual life as that life was converted physically and violently into a sign (“Tennyson’s Elegy for the Anthropocene: Genre, Form, and Species Being.” Victorian Studies 58.2 [2016]: 224-233).